Recently, a study found that Otzi, the 5,300-year-old ice-mummy, was infected with H. pylori. Today it is estimated that it is present in about half the population, but what is it?

Helicobacter Pylori or H. Pylori is an infection that occurs in the stomach and intestines. It is usually present in contaminated saliva, vomit or fecal matter. H. Pylori is likely spread through food or water, but our body’s immune system – when healthy – fights infections caused by foreign bacteria like H. Pylori.

Complications from an H. Pylori infection can include:

Symptoms of an aggressive H. pylori infection are:

H. Pylori is one of many pathogens that can adversely affect the gastrointestinal tract. In most people, H pylori does not show symptoms. Alternatively, H pylori is famous to show symptoms not related to it on a slow and steady basis. Basically symptoms that wouldn’t alarm the patient or doctor to look into it. Thus, it is one of the most mis diagnosed infection in the world.

The easiest way to judge whether you have H pylori is by some of these early symptoms:

Additionally a presence of H pylori with Candida albicans is very common.

How to Test for H pylori?

H pylori as an infection is one of the most misdiagnosed infections. This is because all the tests for H pylori have some or the other limitations which causes it to come negative in over 70% of the cases. Additionally, sub clinical infections are rampant and cause minor problems repeatedly, without showing cause for concern. These are the real culprits. These are the methods to test for an H pylori infection:

Up to 2 wk before the test, the patient must stop taking any antibiotics, bismuth-containing medications such as Pepto-Bismol, and PPIs. The patient swallows a special substance containing urea (a waste product the body produces as it breaks down protein) that has been made harmlessly radioactive. If H. pylori is present, the bacteria convert the urea into CO2, which is detected and recorded in the exhaled breath after 10 min. This test can identify almost all people who have H. pylori and confirm that the infection has been fully treated.

A test to detect the genetic traces of H. pylori in the feces appears to be as accurate as the breath test for initially detecting the bacteria, and for detecting recurrences after antibiotic therapy. This test can also be used to diagnose H. pylori infection and confirm that it has been eradicated.

Another way to identify the presence of H. pylori is by taking a tissue biopsy. H. pylori DNA is screened using a nested PCR amplification method for a portion of the 23S rRNA gene. Tissue samples can also be cultured on homogenized brain-heart infusion agar. Suspected colonies are tested and catalase-, oxidase- and urease-positive, curved Gram-negative rods are defined as H. pylori.

However, the efficiency of all these tests lies at about 50%. That means that there is a 50% chance of the results of these tests being incorrect. This is because H pylori as an bacteria is very smart. It not only lives in the Pylorus of the stomach but spreads across like any other bacteria. It goes in the blood lines. There have been various reports suggesting that an H pylori test which came positive one day, came negative the next and positive again the next. Thus it is not efficient to get a test done. The best way to judge if you have the infection is to look at the symptoms and judge – since over half the world has it.

Most often, antibiotics are prescribed to help cure an H. Pylori infection, however, this can be ineffective. Our gut houses billions of friendly bacteria which help contribute to a healthy immune system. When these are killed off, along with the intended, “bad” bacteria with antibiotics, we alter our natural immunity.

Also, there is growing concern that doctors are prescribing antibiotics far too often, causing antibiotic-resistance. This can mean that you need to take several rounds of antibiotics to get rid of the infection. Sometimes, several types of powerful antibiotics won’t work, as the pathogens have learned how to thrive even in their presence.

In brief, antibiotics can cause negative side effects such as:

Other medications prescribed include acid-blockers, and histamine blockers, and proton pump inhibitors. These each come with their own set of problems, and none of them addresses the underlying cause of the H. pylori infection – poor immunity.

Acid blockers reduce acid in the stomach, presumably, to lessen discomfort associated with the infection and an inflamed stomach lining, but this acid is necessary to break down our food so that we can absorb the nutrients it supplies. Reducing acid also won’t get rid of the foreign pathogens causing the problem.

What’s more — Helicobacter Pylori is the only bacteria that can survive in the stomach’s acid environment. The pathogen burrows into the stomach lining and disrupts natural mucous levels which can lead to serious disorders such as autoimmune diseases, heart disease and cancer.

Histamine blockers and proton pump inhibitors also cause a host of negative side effects including:

There are many natural remedies which will not cause antibiotic resistance, and that help to improve overall gut health simultaneously. They also lack the laundry list of negative side-effects you just read.

You may wish to try these to cure your H. pylori infection instead of traditional, allopathic medicines.

These herbs can lower gut inflammation, which makes your intestines and stomach a breeding ground for pathogens:

Chinese Traditional Medicine (TCM) has its own methods of curing H. pylori and other gastrointestinal infections. Utilizing a combination of herbs, moxibustion, and acupuncture, TCM aims to strengthen the immune system and organs of digestion and elimination, including the liver and kidneys. A Coptis Deconcoction (Huang Lian Jie Du Tang) is most often used to clear damp heat from the body, but other herbal remedies are utilized as well including:

While yoga cannot rid the body of a pathogen once it has made itself at home inside your stomach and gut, it can certainly help prevent those pathogens from getting there in the first place. It does this by strengthening the digestive organs and qi therein, as well as helping to remove toxic overload from your body. These things, in turn, strengthen the immune system, and make it less likely that any pathogen – including H. pylori will attack.

Whether you’re guilty of often over-eating or just eating the wrong foods, yoga can help to purge the body of excess waste. Many people find that they can cure irritable bowel and other gastrointestinal issues with a consistent yoga practice along with healthier lifestyle choices.

First step is to provide a proper boost to your enzymes. This will help the digestive system break down the food you eat properly. A good product includes acids and enzymes similar to those naturally produced by the stomach.

Xembran is a herbal product by Grocare. It increases stomach acid to break down the food properly for complete digestion.

Xembran also makes the digestive system stronger naturally. The body then starts to heal on its own, rather than make you rely on ant-acids and antibiotics. Xembran is the first herbal formulation designed to eliminate Helicobacter Pylori infection in the body. Being completely herbal in nature, it does not have any side effects.

Follow a sound diet, incorporate the foods listed herein, and get plenty of rest. Eat small meals, with the largest being first thing in the morning. Spend time in nature, as this too, helps to boost immunity. By following these protocols you can reverse an H. pylori infection for good, and know that it will never return.

With all these amazing methods to treat H. pylori, hopefully this bout will be your last. 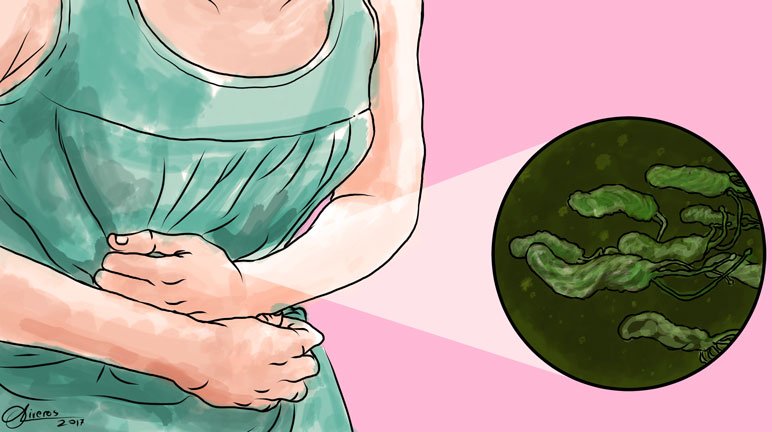